It's time to take a look back at the Nameless Studios Award nominees in supporting acting categories from the very first awards ceremony, in 2008. Without further ado...a look back in time! 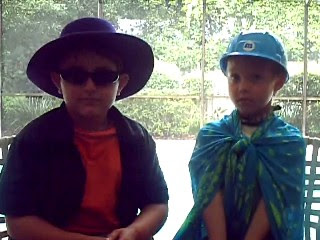 From the moment that Danny Callihan's Dr. Shallow comes onscreen, we know we won't be able to resist him. He's cute, clever, and ever witty. The perfect assistant to his co-star Sean's levelheadedness, Danny works so wonderfully as a doctor that just might be a superhero in disguise, as he LOOKS IN THE BOOK! and does other such fantastic things.

Robert Fleitz as Michael Borjevej
in "The Body in the Closet" 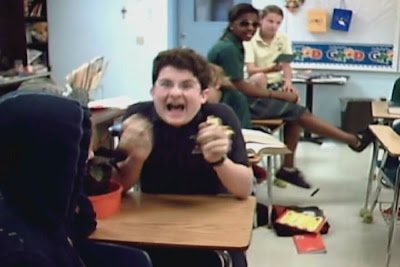 Robert's hilarious creation of Michael Borjevej is one of the most hysterical in "The Body in the Closet". Fleitz takes it one more notch over the top in the already over the top film - from his opening statement about bunnies vs. sheep, to his singing in the hallway, to his odd death at the end, we're never quite sure if this kid is legitimately crazy or if he's got something else up his sleeve. We're pretty sure it's the former though.

Frezghi Nowell as Himself
in "Dis" 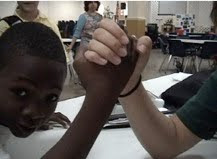 It's hard to argue against the fact that Frezghi's nomination was a filler for that fourth slot in the lineup. However, one cannot forget why he was considered in the first place! Nowell's attitude during the entire short is fantastically bitter, especially in his interactions with Maria Cuervo. As he smacks the camera at the end of the "film", we know that he's totally into it. 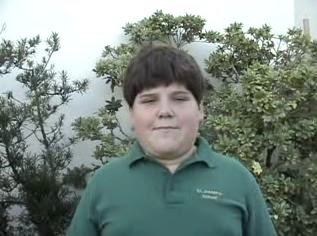 Alex Pilka gives one of Nameless Studios's most memorable performances in his winning portrayal of Paul Greene. Paul is a bitter middle schooler who is forced to work with George, whom he obviously dislikes. Paul, like most of the other characters in the movie, has his own secret agenda, and Pilka portrays this comically and perfectly. As the angry Paul, Alex Pilka captures the nuances and hilarities of his character flawlessly.

Maria Cuervo as Esmerelda Black
in "The Spelling Bee" 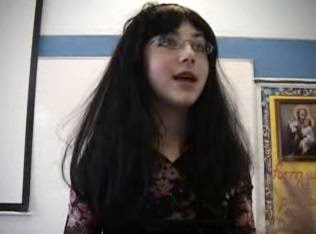 As the goth Esmerelda, Maria is quite amazing. From the beginning of the interview, Cuervo delievers her improvised lines with a perfect cynicism and an ultimate heart. She's both intimidating and hilarious, and her outburst about Nazis at the end solidifies the already fantastic performance as one that should last the test of time, even in the poorly received "Spelling Bee"! 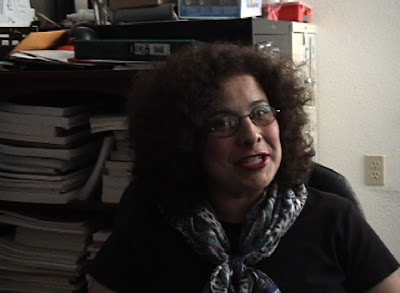 Teresa Fleitz never once interacts with the other characters in the movie, yet her performance as bizarre teacher Ella Lyme was memorable enough to make her the year's winner. Fleitz is a welcome breath of comedic over-the-top acting in the restrained comedy "Politically Correct", and her memorable lines like "it was like a tornado..." or "I see ROMAN SHADES in this room!" will go down in Nameless history.

Janice Kramer as Mrs. Murphy
in "The Body in the Closet" 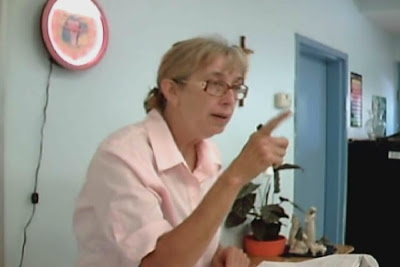 Spoiler alert! Mrs. Murphy is the killer in the epic cult classic "The Body in the Closet", and in this role Janice Kramer gives one of the most memorable performances of all time. Kramer allows us to feel a little uncomfortable with Mrs. Murphy from the very beginning - is she really the nice teacher she seems to be? And then, things go downhill. Kramer's last scene, in which she completes the murders, is one of the most amazing and haunting in Nameless history. A tour-de-force!

If Teresa Fleitz is the crazy comedic relief of "PC", then Larissa Lamour is the heart of the piece. She plays the fun loving Luisa, a girl who just wants to be a part of the news show for the ride and who seems to just want to have a good time with no hidden agenda. We truly see the heart to the character when she discovers of Fiera's evil master plan and has to deal with the moral conflict of whether or not to tell George and Laura. Larissa gives a perfectly lovely performance!

Samantha Whitham as Mindy
in "The Mystery of the Golden Bunny" 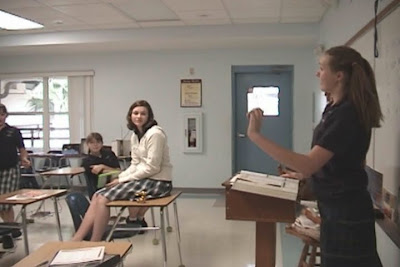 Mindy is more than just a ditz - she's a conspiring thief, and from the very beginning of the movie Sam Whitham knows how to portray the character perfectly. She gets this faux innocence that is just right for Mindy, and acts as ditzy as Mindy truly is creating both a three-dimensional character and a hilarious caricature all at once.

So there you have it! Be sure to go to our Youtube and rewatch all the classics from which these amazing performances come. Tune in later for a look at the leading nominees!
Posted by Robert at 12:00 PM